What with all the rain, I've been bored enough to do a quick hunt through iTunes and interweb-land to see if there's anything new in the way of Maths Apps - or rather Math Apps, as they tend to be called. I try to check every now and then - here's an old post on another blog giving a few good 'uns already - as these can be useful for telling kids/parents about. Or, of course, you could use them in class, if you happen to have an iPod and a way of displaying the output. (If you have an iPhone this is easy-peasy, by the way, but for Luddites like me with a wind-up iPod Touch, the best I can manage is to display the output using a visualiser. Don't have a visualiser? Lobby your Headteacher/HoD immediately!)

Anyway, I found a handful of decent enough apps, all free. First up, the good people of Loughborough University, who have developed "Mathscard" apps which give formulae for GCSE and for A/As Level. 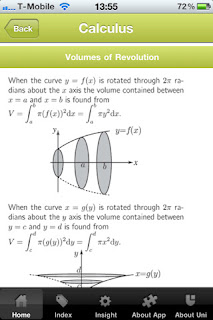 Yes, yes, I know this is not much cop for a Scottish curriculum, but a formula is a formula, at the end of the day. And did I mention the free bit?

Next - and very much for the lower end of the market - comes a company calling itself Maths Tappers. Hmm. They have a few free apps to play with but the one that caught my eye is their "equivalents" app, which gets pupils to match fractions and percentages. 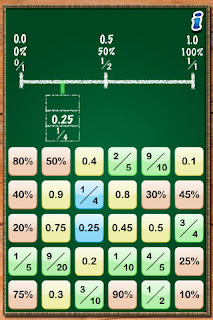 In my experience, the more practice pupils get at this sort of stuff, the better. You bet your life I'll be recommending the hell out of this one to all and sundry.

Posted by maths teacher at 7:08 AM No comments: