A bit of background

Well, summer is almost upon us, and the end of term is approaching just as surely as DVDs of “Braveheart” are showing in History classrooms across Scotland. Not long to go now, folks, yet already the next session begins to intrude. Ah, the joys of the June start to a new timetable, to say nothing of the three-day P7 visit. And just today I took delivery of my new Teacher’s Planner for session 2012-2013. I’m sad to admit I was more than a tad excited by this, and immediately set about colouring in the holidays in the calendar at the front.

But back to this blog… I’m still very much in the setting things up phase, so I may as well give a bit of background, because to a certain extent We Have Been Here Before. It may seem odd to link to some old blogs of mine, but what the heck, if it can bring any form of insight or pleasure then I’m up for it.

The Proof Is Out There
I’m still proud of that title. Yes, here is where it all began, with the Top Ten Mathematics Textbooks of all time (go look, it hasn’t changed much), and hymns of praise to marker pens of a certain brand. Eventually film reviews began to creep their way into TPIOT, which led to the launch of…

Maths Teacher Goes To The Movies
… which does exactly what it says on the tin. And, I might add, was once mentioned in the Times Education Supplement Scotland. However as my movie-going began to wane, so did the blog. Next up then:

maths4edinburgh
I’m still embarrassed by that title. But appropriately enough this was an attempt to run a blog for teachers in and around Edinburgh that would highlight events, resources etc and generally be A Good Thing. It ran for quite a while and had, I like to think, something of a cult following. And no, that’s not a misprint. M4E is hosted on edublogs though, and eventually I got frustrated with the near-constant demands to upgrade to the Pro version (kerching) and the warnings of imminent memory death if I didn’t. And so I vowed to leave, heading off in search of a better life. Not having much in the way of any offers, I decided to head back to good old Blogger, though I do admit it’s taken me a while to get here. I did consider relaunching TPIOT but in the end I decided that a fresh start was called for. And so here we are.

OK, that's enough nostalgia. Onwards! As well as sharing resources, I do hope to take time to ruminate, fulminate and prevaricate over this whole business of education - maths education in particular. But right now, I can head some Maltesers calling...
Posted by maths teacher at 10:13 AM No comments: 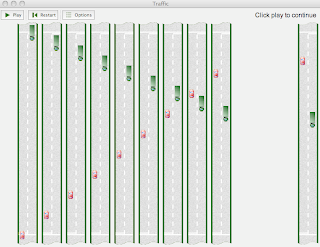 My excitement knows no bounds, though to be fair I am seeing a doctor about it. This is a screengrab from the rather wonderful "Traffic" program, which forms part of the package The Language of Functions and Graphs. You'll find this in a variety of places - it's in the DfE's Standards Unit, for one thing - but it's taken me ages to find the actual program as opposed to the worksheets. Steps forward and take a bow, then, the wonderful people at the STEM resource library hingmy.

I remember this from back in the day, when it was part of the award-winning package called (seriously) The Shell Red Box, by Malcolm Swan. I used the wee computer program with a BBC micro - man, we were cutting edge at Beeslack High School in the 80's, I tell you - but it's good to see the graphics have been spruced up a bit.

My advice to you is just to get in and play, but be warned as you'll have to set up an account with the STEM folk first. Fear not, it's free. I used the first few examples in the program with my S3 class as we continued our journey (see what I did there) with Distance/Speed/Time, and you'll struggle to find a better introduction to Distance/Time graphs. You can play the situation through without the snapshots and graph and invite pupils to work together and agree their version of the graph. Show-me-boards ahoy!
Posted by maths teacher at 9:29 AM No comments: 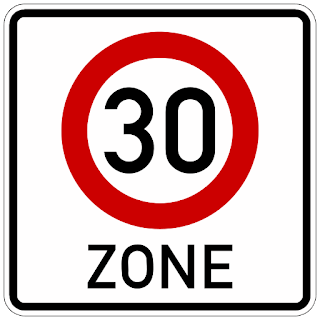 OK, so clearly we have to do a bit of "welcome, welcome" stuff, what with this being a new blog and all. I also have to point in the general direction of my other blogs, just in case anyone still needs to catch up on the world-famous "Maths Teacher Goes To The Movies" blog (as featured in TES, folks!). But stuff that for a game of soldiers and on with the motley. There'll be time for hellos later.

So I'm teaching Distance/Speed/Time to my new S3 class, and I decided to look for some slightly more imaginative starters, as you do. A quick hunt round t'internet brought up Usain Bolt's world record time of  9.58 seconds for the 100m, set in Berlin in 2009. It's a nice enough question to ask the class to work out Bolt's speed in kilometres per hour, but an even better one is: should he have been arrested for speeding? It seems that in residential areas in Germany there's often a speed limit of 30kph.

There's even a clip you can show from youtube (along with annoying adverts, for which apologies):


See what your class think. I won't spoil things by telling you the answer.
Posted by maths teacher at 12:41 PM No comments: